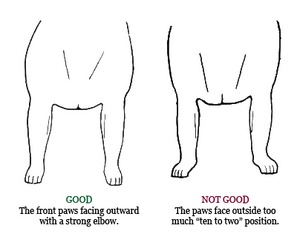 Dog Physical Characteristics
Here is a list of the morphological characteristics of pitbull-type dogs in Montreal. I know it’s a little long and confusing, but this is what mayor Denis Coderre’s team came up with five months AFTER the by-law was passed. You’ll find my explanation or clarification, in red, next to the criterion. Professionally speaking, the following twenty points seem improvised and are highly discussable.

Do you see a problem with Montreal’s pitbull-type dog criteria? If not, let me point it out. The problem is the following; there’s no indication as to which criteria and how many of them turn dogs from non-pitbull to pitbull-type dogs. The above document only states, and I quote "several of the morphological traits listed". When the life or death of an animal depends on objective observations as means of classification, one would expect to have measurable data and a set number of characteristics. A dog's body could be measured and compared to a template, so why not create one?! For example, if a dog conforms to a minimum of 17/20 characteristics, which were measured and determined as a positive match to the predetermined standard, then, and only then, would you have a pitbull-type dog.

I think the city of Montreal, and other BSL cities, need to clarify this question. People need to know how many of the criteria qualifies their dog as pitbull-type and to which extent. If a 90o stop is required, does a +/- 5o rule apply? If a dog has twenty of the above-mentioned criteria but has a misaligned dental occlusion, is the dog immediately disqualified? Does a dog need to have all twenty criteria to be considered pitbull-type?

Morphology Shishmology
I want to end with the notion that dogs aren’t machines. They come in many, many, different shapes, sizes, and colours, and to qualify them based on nonsense criteria is simply irresponsible and unprofessional. Dog caregivers need a better-defined morphological chart. Furthermore, elected city officials need to step up and take their biased and idiotic approach to dangerous dog management and try to make something professional and coherent out of it. Till then, I know who I’m going to vote for, do you?